Amazing Grace. Mary Hoffman. (Pre-K – 1) Although classmates say that she cannot play Peter Pan in the school play because she’s black and a girl, Grace discovers that she can do anything she sets her mind to.

Big Bob, Little Bob. James Howe. (Pre-K – 2) Despite the fact that they share a name, they are different. Big Bob likes trucks and throwing balls and being loud. Little Bob likes dolls and jingling bracelets and being quiet. Yet, they become friends. When a neighbor teases Little Bob about dolls, Big Bob steps in with “Boys can do whatever they want.” Lesson Plan.

Chocolate Me! Taye Diggs. (Pre-K – 1) Teased for looking different than the other kids—his skin is darker, his hair curlier—he tells his mother he wishes he could be more like everyone else. And she helps him to see how beautiful he really, truly is. Lesson Plan.

The Day You Begin / El día en que descubres quién eres. Jacqueline Woodson. (K – 3) Follows a series of students who feel like they stand out and are teased by their classmates. Woodson reminds us that we all feel like outsiders sometimes—and how brave it is that we go forth anyway. English and Spanish editions.

Each Kindness. Jacqueline Woodson. (1 – 3) Every time Maya tries to join Chloe and her friends, they reject her. Eventually she stops coming to school. When Chloe's teacher gives a lesson about how even small acts of kindness can change the world, Chloe is stung by the lost opportunity for friendship.

The Invisible Boy. Trudy Ludwig. (K – 3)  Nobody ever seems to notice Brian or think to include him in their group, game, or birthday party . . . until, that is, a new kid comes to class.

Jacob’s New Dress. Sarah and Ian Hoffman. (Pre-K – 2)  Jacob loves playing dress-up, when he can be anything he wants to be. Some kids at school say he can't wear "girl" clothes, but Jacob wants to wear a dress. Can he convince his parents to let him wear what he wants? Lesson Plan.

Marisol McDonald Doesn't Match / Marisol McDonald no combina. Monica Brown. (K – 2) Marisol, a multiracial girl, loves to be creative, eating peanut butter and jelly burritos, for example. But at times she is misunderstood and teased by peers. Bilingual.

Morris Micklewhite and the Tangerine Dress. Christine Baldacchino. (Pre-K – 2)  Morris loves wearing the tangerine dress in the dress-up center, but the others don’t understand. One day when Morris feels all alone and sick from their taunts, he stays home. With help from his mom and his imagination, he returns to school and begins to connect with others.

Muskrat Will Be Swimming. Cheryl Savageau. (2 – 4) A Native American girl’s feelings are hurt when classmates make fun of the children who live at the lake, but then her grampa tells her a Seneca folktale that reminds her how much she appreciates her home and her place in the world. Lesson Plan.

My Name Is Bilal. Asma Mobin-Uddin & Barbara Kiwak. (3 – 5) A brother and sister are the only Muslim students at their school. When the sister is teased for wearing a headscarf, Bilal finds the courage to stand up for her. Lesson Plan.

One. Kathryn Otoshi. (Pre-K – 1) Red picks on Blue. The other colors don’t know what to do until One shows them how to stand up, stand together, and count. Also see, Zero. One is featured in the Welcoming Schools' video "What Can We Do?". Lesson Plan.

Red: A Crayon's Story. Michael Hall. (PreK – 1)  A blue crayon mistakenly labeled as "red" suffers an identity crisis. Almost everyone tries to “help” him be red until a friend offers a new perspective. He’s blue! About finding the courage to be true to your inner self. This can be read on multiple levels. Lesson Plan.

The Sneetches and Other Stories. Dr. Seuss. (Pre-K – 3) The Sneetches are bamboozled by Sylvester McMonkey McBean, who teaches them that pointless prejudice can be costly.

Wings. Christopher Myers. (1 – 5) Take flight with Ikarus Jackson, the boy with wings who remains true to his dreams despite taunts. One girl realizes he must be lonely and resolves to stop the hurtful words. Lesson Plan.

The Exact Location of Home. Kate Messner. (3 – 5) Zig’s dad canceled his last visit with no explanation. Zig and his mom struggle financially including becoming homeless. Zig sets out to find his dad with a GPS and clues around town.

Garvey's Choice. Nikki Grimes. (4 – 7) Since Garvey’s father has always wanted him to be athletic, he has felt like a failure even though he’s kind, funny and smart. When he joins the chorus, he literally finds his voice. An emotional novel written in short verse of a young black boy choosing to be true to himself.

Ghost. Jason Reynolds. (4 – 8) Ghost has a natural talent for running. But can he run fast enough to get away from his past or does he have to figure out how to deal with it and his raw emotions. Bullied at school, Ghost reacts in both bad and good ways.

Gracefully Grayson. Ami Polonsky. (5 – 7)  Grayson has been holding onto a secret for what seems like forever: "he" is a girl on the inside. Will new strength from an unexpected friendship and a caring teacher's wisdom be enough to help Grayson step into the spotlight she was born to inhabit?

The Great Wall of Lucy Wu. Wendy Wan Long Shang. (3 – 6)  A humorous and heartwarming story about split cultural identities, and the way life doesn’t go as planned for sixth-grader Lucy Wu – especially when her great-aunt comes for an extended visit from China.

A Handful of Stars. Cynthia Lord. (3 – 6) This powerful middle-grade novel from the Newbery Honor author of RULES explores a friendship between a small-town girl and the daughter of migrant workers.

Inside Out and Back Again. Thanhha Lai. (4 – 7) Hà has only known life in Saigon, but now the Vietnam War has reached her home. Hà and her family are forced to flee. She ends up in Alabama. The story of one girl's year of change, dreams, grief, and healing as she journeys from one country to another, one life to the next. Short free–verse poems.

The Liberation of Gabriel King. K. L. Going. (4 – 5) In Georgia in 1976, Gabriel, a white boy, and Frita, an African American girl, overcome their fears of bullying and prejudice together as they enter 5th grade.

The Misfits. James Howe. (6 – 9)  Four best friends try to survive seventh grade in the face of all-too-frequent taunts based on their weight, height, intelligence and sexual orientation/gender expression. The characters are not cast as victims, but as self-empowered agents of change. Continues with Totally Joe, Addie on the Inside, and Also Known as Elvis.

The Popularity Papers: Book Two: The Long-Distance Dispatch Between Lydia Goldblatt and Julie Graham-Chang. Amy Ignatow. (4 – 6) Although now in different schools, each is dealing with bullying and what it means to be popular. Notebook/graphic format.

The Revealers. Doug Wilhelm. (5 – 7) At Parkland Middle School, three bullied seventh graders start an e-mail forum to publicize their experiences. Unexpectedly, many other kids come forward to confess their similar troubles. It’s clear that the problem at their school is larger than anyone knew.  In one email, a student tells his troubles of being called gay.

The Skin I'm In. Sharon G Flake. (5 – 7) Maleeka suffers every day from the taunts. If they're not getting at her about her homemade clothes or her good grades, it's about her dark, black skin. But the new teacher's attitude surprises her. Miss Saunders loves the skin she's in. Can Maleeka learn to do the same?

The Stars Beneath Our Feet. David Barclay Moore. (5 – 9) A boy tries to steer a safe path through the projects in Harlem in the wake of his brother’s death. Then Lolly’s mother’s girlfriend brings him a gift that will change everything: two enormous bags filled with Legos.

Totally Joe. James Howe. (6 – 9) Looks at the life of Joe, a character from The Misfits, while he navigates middle school questioning gender expectations and traditional roles as he realizes he is gay.  He has supportive family and friends while dealing with name-calling and controversy. One of four in The Misfits series.

Wishtree. Katherine Applegate. (3 – 7) Trees can't tell jokes, but they can certainly tell stories.... An oak tree and a crow help two children and their neighbors embrace their differences and handle bullying and hate speech.

Wonder / La Lección de August. R.J. Palacio. (5 – 7) Auggie was born with a facial deformity that prevented him from going to a mainstream school until 5th grade. Told from multiple perspectives that highlight different struggles with empathy and acceptance. English and Spanish editions. 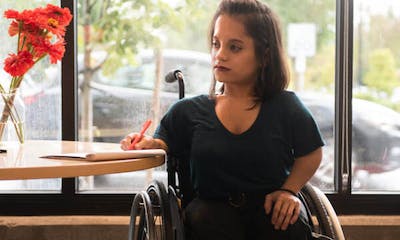 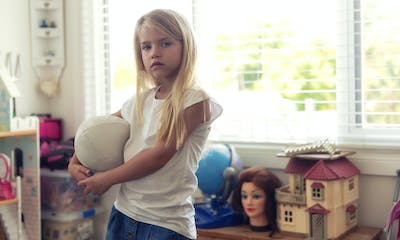